Learn About Our Special Giving Program Going On Now! Click Here for Details!

If you’re a parent looking for help getting your teen prepared for college (or maybe a non-college path)  while still keeping the peace at home then you already know that there are a ton of decisions and options ahead.

You want to see your child succeed after high-school. You have researched and talked with friends, but there is so much conflicting college prep advice. Which exams should your high-school student take? When should they start preparing? Do you need to sign up for dual enrollment or AP tests? And how can you start preparing for college if your teen doesn't even know what he or she wants to do? What if they want to pursue a career path you don't know anything about? What then? If this sounds familiar then you are in the right place!

I was paid to go to college because I had a clear plan for a career path, and I created UniversityReady to help families be strategic in their approach to career and college preparation!

Do I have to take Biology / Chemistry / Physics? 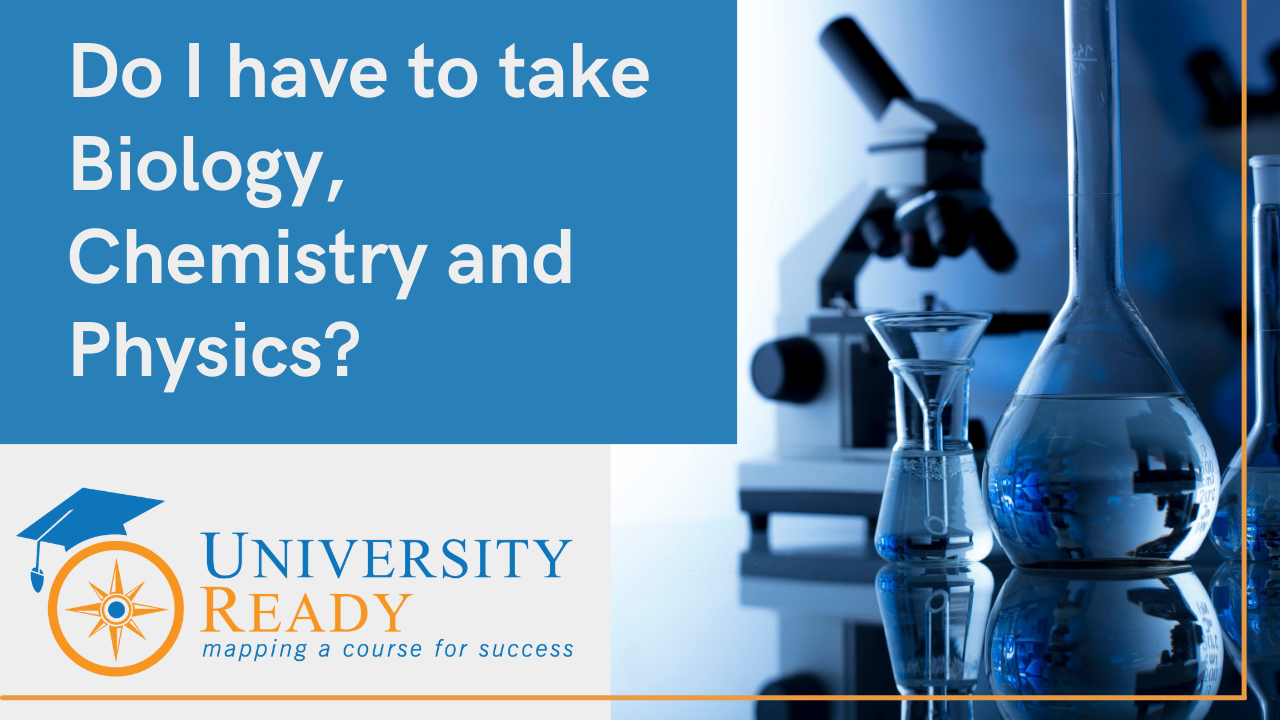 I received the following question about science credits:

I have a daughter finishing 9th grade. She has done well in Biology 1 but doesn't want to take Chemistry or Physics. She is preparing for college and is unsure of her career at this point. She's not interested in science or math careers. She's English and History minded and artsy. What is your opinion of allowing her to take advanced Biology and maybe Marine Biology instead of Chemistry and Physics.

Great question! It can be confusing on the requirements when it comes to science, as we typically associate the core sciences of Biology, Chemistry, and Physics as being mandatory.

However, unlike math where Algebra 1, Algebra 2 and Geometry are pretty much required nation-wide, there is a lot more flexibility in most states when it comes to science requirements. By far Biology is the most commonly required science (if any), with Physical Science coming in second. In most states, there are...

Learn to Eat the Frog

One of the most important skills a student can learn in high school is how to eat a frog.

Yep. You heard me right.

There are a couple of different quotes, attributed to Mark Twain (although more likely said by Nicolas Chamfort), which go something like this:

Okay, now that you've lost your appetite, let's get serious. Obviously we're not really encouraging you to go out and gorge yourself on a poor amphibian, but rather that you should tackle whatever sounds the least appealing first in your day. Getting that unpleasantry out of the way on the front end allows for things to be smoother as the day progresses because you've already got the most difficult part out of the way.

Does Dual Enrollment Count as 1 Credit or .5 for High School?

For dual enrollment, does each college semester class count as 1 credit or .5 credits for high school?

Great question! So when you are looking at the content that is covered in a Dual Enrollment course, a one-semester college class is typically considered to be the equivalency of a year of high school. So what you would normally cover in a whole year of high school Spanish 1 will be covered in one semester of Spanish at a college, a year of biology in high school will be equivalent to the first semester of biology in college, etc (should definitely take that into consideration when evaluating if your teen is ready for Dual Enrollment!).

How does that count when it comes to your transcript? When you take a Dual Enrollment course through a college (whether online, at the college campus, or at your high school through a DE arrangement), you will typically receive 3 hours of college credit (which will be on a transcript from that college that you will send to the school you...

I received the following question:

My daughter is in 8th grade this year. I am curious, if she takes classes this year that meet her HS requirements, can I count them as such or does she have to wait until next year for them to count?

The answer to this really depends upon your specific school or entity that you are under academically, but generally speaking yes, you can typically count 2-3 credits from junior high (7th/8th grade) towards your high school credit requirements.

Usually there are restrictions on the type of credits that are allowed, and they typically fall into the following three categories:

What classes do I need to take?

That's a really important question, and is based on two factors:

The answer to the first question is dependant upon the state and academic program you are with (if you are homeschooled check out the bottom of this article for a little more advice). We have a list below of the ranges of credit requirements for most states.

The second question is a lot easier. Most colleges have relatively straightforward credit requirements, and pretty much any state's basic graduation requirements would meet the admissions requirements for ~90% of schools. There are some top-tier colleges that are looking for more challenging academic workloads, and there are some specific departments/majors that might want more than the standard number of credits (engineering may prefer students with 4+ science credits, for instance). To find...

Should I take Algebra 2 or Geometry first?

So I've received multiple questions from individuals who are planning out their course load and trying to determine whether to take Geometry or Algebra 2 after completing Algebra 1. It's an understandable question, so in this article I'll take a look at the arguments for both routes, but the short answer is either way is fine. Now let's take a look at the reasons for each route...

A Short History (and a little about test preparedness)

Parents, chances are pretty good that you took courses in the order of Algebra 1, Geometry, and then Algebra 2. You probably also only had to take 3 math courses in high school, and there was probably very little integration of geometry into your algebra curriculum. Since students were required to take the ACT or SAT (and usually with little to no prep work), it made more sense for students to take geometry before algebra 2 for test purposes so that they had at least seen some geometry before they took the test. 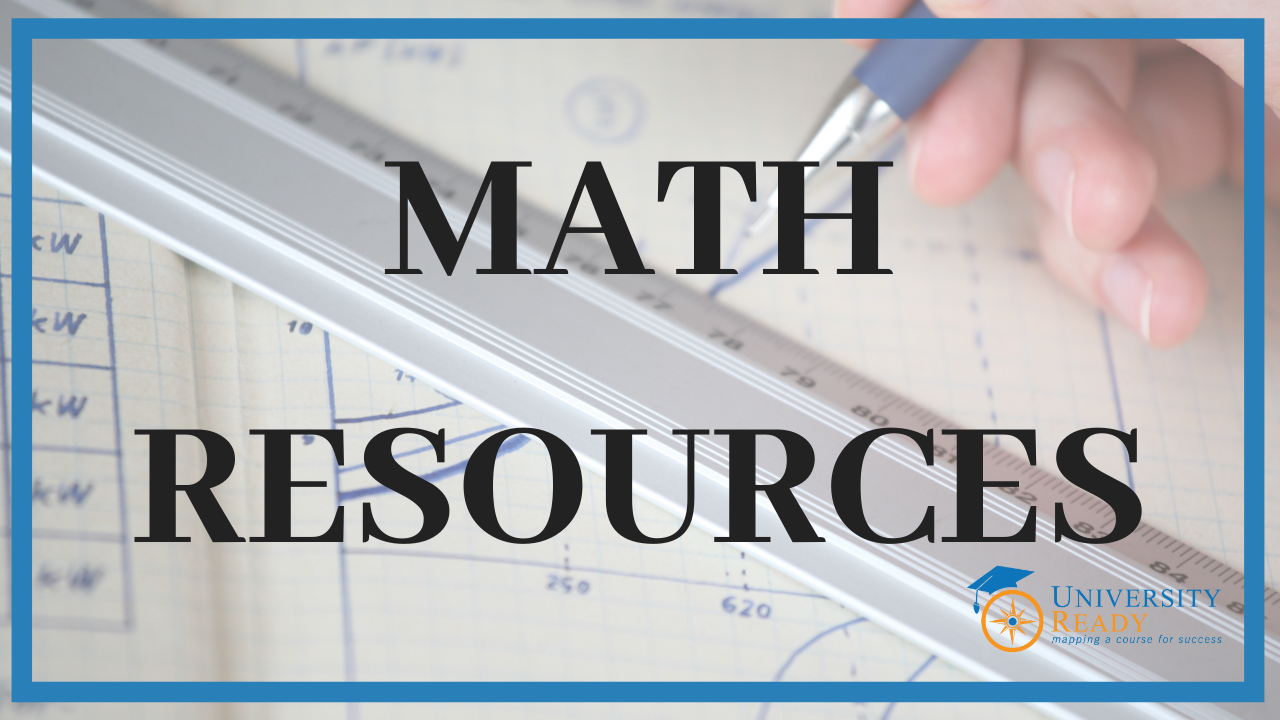 Math. The sheer word can strike terror in the hearts of parents and students alike. I’ve been tutoring math for 13 years, and the number of technology tools to help students learn math has grown exponentially. For those times when you need some extra support, here is my top collection of resources for more practice and help (I am not paid for any of these recommendations):

Sometimes all that’s needed is some extra practice. Here are some websites that can allow you to create or locate free worksheets:

Free, pre-created worksheets for every primary concept pre-algebra through calculus.

While not as extensive as Kuta Software, Math-Drills still has a robust number of math worksheets available.

A collection of math worksheets, practice problems and videos for Algebra 1, Algebra 2, the PSAT and the SAT.

Stay up to date with our resources for college and career prep!

We know that college prep can be overwhelming. That's why we work hard to simplify and streamline the advice on how to guide your teen to success. Sign up below to join our newsletter (we hate spam, and never sell or rent out your info).